For most adults, the magic of snow days disappeared right around the time that the realities of working life sank in. Snow days now mean higher heating bills, exhausting shoveling, and less-than-pleasant commutes.

But for those of us in ecommerce, snowfall should reignite those warm and fuzzy feelings. All that precipitation limits the amount of shopping consumers can do in brick and mortar stores, leading them to browse online. The data doesn’t lie: online retailers have seen significantly higher sales on days with a ton of snow. 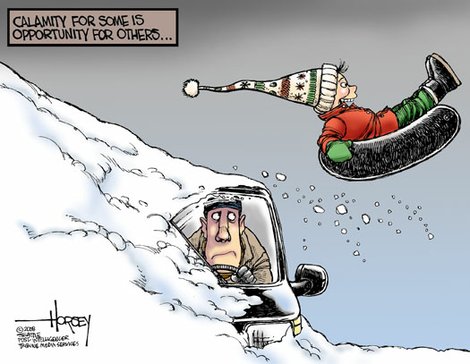 So in light of the approaching season, here are four reasons ecommerce storeowners should be asking, “Do you want to build a snowman?”

1) It begins to look a lot like Christmas: Snow is an instant mood-setter. It calls to mind holiday gatherings and, more importantly, buying presents. There’s nothing better than a pile of the white stuff to serve as a fluffy reminder that the days are ticking away until the year’s annual present swap. This is a great time to boost your list size size with a winter-themed flash sale.

2) Waiting ’til it all blows over: Shoppers won’t want to leave the house during cold, harsh conditions. And even for customers who don’t mind the weather itself, snow means fewer parking spaces and more fighting through crowds. When the weather turns ugly, reach out to shoppers living in areas with unfavorable conditions by segmenting your lists by location.

3) Less room for activities: Snow days mean more down time. And bored people usually fall into one of two categories – those looking for entertainment and those who want to be productive. Give your customers a much-needed activity during their unexpected day off: checking everyone off their shopping lists.

4) Snow doesn’t stop on the 25th: Even after Christmastime storms blow over, the snow keeps on coming. And it turns out shoppers use this downtime to indulge themselves. In 2010, online shopping records were broken when U.S. consumers spent $2.45 billion during a particularly nasty post-holiday snowstorm.

Of course winter weather has its pitfalls, and no one wants to see extreme conditions turn dangerous. But there’s a silver lining to those approaching clouds. Take a moment to touch base with your email list and watch this year’s snow bring in piles of the green stuff.

If you could use some help optimizing your email marketing or website, let’s talk. We are recognized as a top e-commerce design & development company on DesignRush.