Have you read the news? Walmart has made headlines for allowing plus size costumes to appear under a “fat girl” category on its site. While this might have been a back-end error, never meant to be viewed by the public, it’s clearly going to make many people angry. And there’s nothing scarier for ecommerce retailers than a single moment of “oops” turning into a viral online fail.

Whether they are social media goofs, design errors, mispoken words, or technological woopsies, there’s no taking your mistake back once it’s been turned into a meme . Inspired by Walmart’s recent fail and this week’s impending holiday, here is our list of the most terrifying gaffs we’ve seen from top brands in the last five years, in no particular order:

A repeat offender, VS continues to give women a difficult standard of beauty to aspire to – and by difficult we mean it’s physically impossible.

Lopsided breast augmentation, non-existent thighs, and scary small waists have all made appearances on VS website, causing an outcry for less photo editing on models and fueling campaigns like Dove’s Real Beauty and #aerieREAL. As for this poor model to the left, they never did find her missing arm. 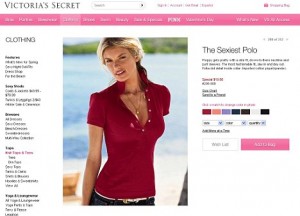 Even a brand with exhaustive customer service like Amazon can slip up time and again. In 2010, customers who had viewed sexual lubricants were retargeted with emails promoting those products. Although the process was standard for other products, something that sensitive of a nature shouldn’t be exploited. Bezos halted the marketing channel (along with other health and personal products) and returned focus on building a book monopoly. 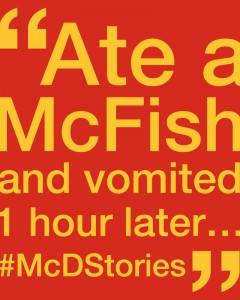 #SpreadtheCheer seems like an innocent-enough hashtag, but when paired with reports thatStarbucks was dodging paying taxes, it turned into a way to shame the brand in its own game. McDonalds, on the other hand, was set-up for disaster. #McDStories turned into a competition for the worst tale of grossness, surrounding the fast-food chain with bad press. The bashtag lives on, as a reminder to consider every angle of a phrase before attaching your brand to it.

If something sounds too good to be true, it probably is. Last November super low prices on electronics made an appearance on Walmart.com – projectors for $8, monitors for $9 – and dozens of buyers thought they found a very lucky sale. Unfortunately even Walmart doesn’t have prices that low. Purchases were canceled and refunded when the company announced a “technical error” had slashed prices accidentally. Still, a faux-price-drop isn’t a good way for any brand to enter the holiday shopping season.

Dozens of enamored friends and lovers got their hearts broken on Valentines Day 2012 when 1-800-Flowers didn’t make their delivery guarantees on hundreds of flowers.

The result? A Twitter stream full of angry customers demanding refunds. While some tweeters complained about orders that never arrived, others furiously sent screenshots of less-than-perfect products as well as delivery confirmation emails they received, even if their flowers were not. Love was definitely not in the air. 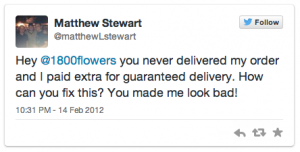 Sara Rosso, arguably once Nutella’s biggest fan, received a cease-and-desist from the company after running World Nutella Day for six years. Protecting your brand name is understandable, but insulting a fan that has dedicated an entire day to celebrating your product – and a large amount of time monitoring sites devoted to it – created a sticky mess for Nutella. The brand eventually dropped the order and is working with Rosso to continue the event.

When millions of credit card numbers, addresses, and personal information were stolen from Target shoppers during the holiday shopping season in 2013, customers were livid, advice articles abounded, and credit card companies sent out new numbers and cards to cover any vulnerabilities. This was definitely not the first data breach in business history (search through an in-depth history here) but it was the start of a slew of breaches that have become old news to American shoppers.

8. Kenneth Cole gets stomped on

In an incredibly awkward hashtag hijack, Kenneth Cole promoted his footwear line alongside a patriotic slogan #BootsOntheGround. Backlash was quick and fiery, reminding brands that when seeking social attention, be careful what you tweet for.

Here’s an example of a bad idea that had good intentions. At BlogHer, a conference for women of social media, one brand tried to stand out from the ocean of free goodies and giveaways by handing out a prescription pill bottle filled with candy. Although Bright Starts toy manufacturer meant well (bottles had prescriptions for giggles), prescribed meds should never be viewed as candy, especially when the bottle could end up in homes with children. 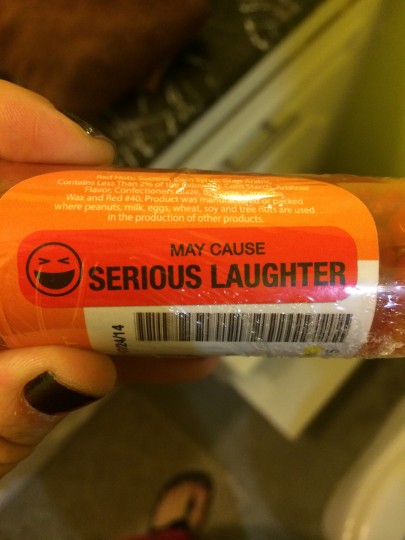 Barilla doesn’t care if you’re homosexual, but you’re not going to be in one of their commercials. The classic family brand offended many consumers with their anti-gay comments last year, prompting a boycott of their products and allowing competitors the chance to have some fun with the subject.

Find an average how-to guide for social media marketing. Then do the exact opposite. This was the game plan for Brooklyn-based eyewear seller DecorMyEyes, a company aiming for as much negative publicity as possible. Fraudulent charges, threatening emails, and voicemail messages were the hallmark of Vitaly Broker’s customer service, which the New York Times dubbed “a new brand of anti-salesmanship.” Borker figured the negative publicity would increase the ranking of his landing pages, which it did. It also eventually landed him in jail. 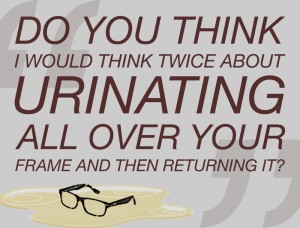 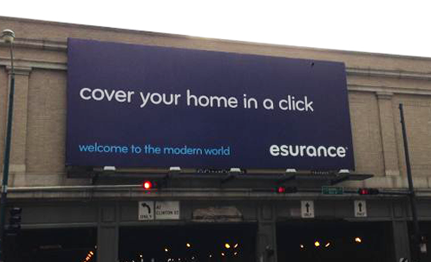 Copywriters and designers know you have to be careful about kerning. Although this Esurance ad looks ok straight on, a side view or a little ripple quickly turned it into something rather obscene. The billboards were removed after a few embarrassing tweets and Photoshop manipulations.

13. Adecco steals from the little guy

Blogger Turner Barr went from a 9-5 drone to a travel explor-dinaire when he agreed to take any job for a day anywhere in the world. He hosted it all on his site Around the World in 80 Jobs.

A job he definitely wasn’t expecting was defendant of intellectual property when human resource company, Adecco, trademarked his site’s name and ran a contest under it. But as we have learned, creatives are not a group to be stepped on. Friends and followers unleashed a torrent of fury at Adecco, which unfortunately live streamed onto their site’s Twitter feed. The company eventually backed down but everyone learned a hard lesson in copyrights, creative property, and ticking off a beloved Internet blogger. 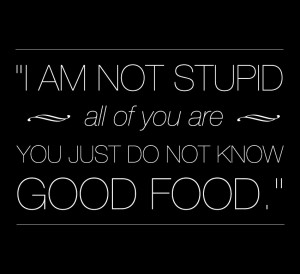 The social media blow-up from Amy’s Baking Company is a favorite on the list if only for the pure madness surrounding it. After being given up on by Gordon Ramseyon Kitchen Nightmares, Amy’s Baking Company went on a Facebook tirade (including the gem to the left) criticizing followers and members of Reddit who liked the page just to comment. In fact thousands liked the page to see the chaos unfold.

After over a dozen caps locked posts threatening legal action and insulting their social media followers, Amy and Samy announced that their page had been hacked and they were not responsible for any of the negative posts. Yet as recently as April of this year, they continue to bash haters. They have also had a strange success because of the legendary fail, which has earned them a place on Know Your Meme and a special place in our hearts.

Keeping up with fast-paced social media trends is difficult. But not researching your hashtags before you use them can land your brand in serious doo-doo. Case and point: DiGiorno Pizza. Its Twitter feed is known for being loud, witty, and quick to the punch, but last month it also became known for hijacking a hashtag about domestic violence. When #WhyIStayed started trending with stories from women about abusive relationships, DiGiorno leaped before it looked with “#WhyIStayed You had pizza.” It immediately removed the tweet and began apologizing but not before a flurry of angry tweets responded. 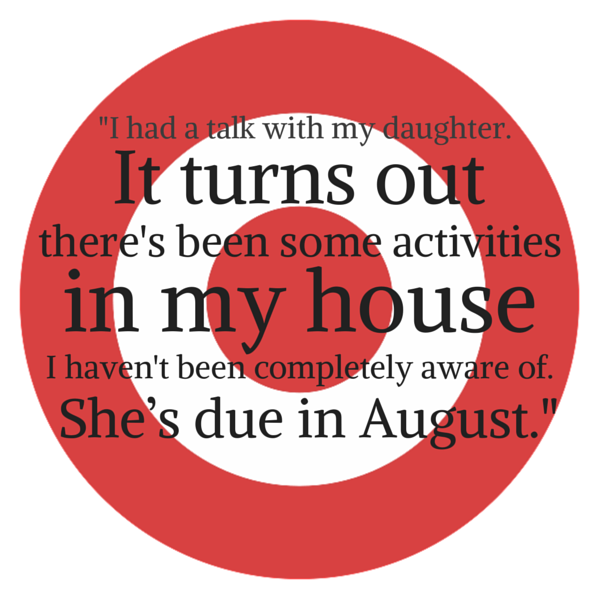 Information is a wonderful thing, and using it to better assist your customer’s shopping choices is an all around win – except, that is, when you find out information they might have wanted to keep a secret. Like when Target determined women who buy certain vitamins, lotions, and soaps at certain time periods are most likely pregnant, and sent those women baby advertisements and flyers. That was the case with a Minneapolis father whose teen daughter was sent direct mail for her unborn baby, which she hadn’t told her dad about yet. Awkwardness ensued.

Here’s a math problem for you: Pepsi x A Poor Font Choice = Rape? At least that was the case with Pepsi’s cross-promotion of Japanese company A Bathing Ape and an under-proofed advertisement. 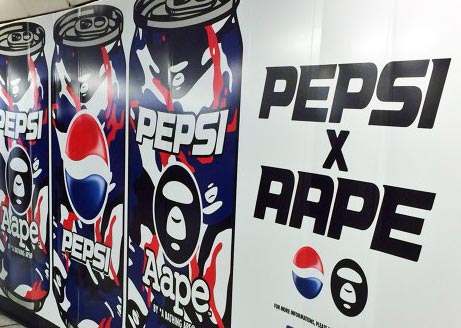 When someone has a problem with your product – especially if you are selling athletic wear – you probably shouldn’t blame the size of your customers’ thighs. LuLuLemon’s founder Chip Wilson made comments along this nature when during an interview he responded to complaints about the see-through fabric of yoga pants with “It’s more about the rubbing through the thighs. How much pressure is there.” Customers were not especially happy with this answer and neither were LuLuLemon’s stockholders. Chip Wilson resigned a month later.